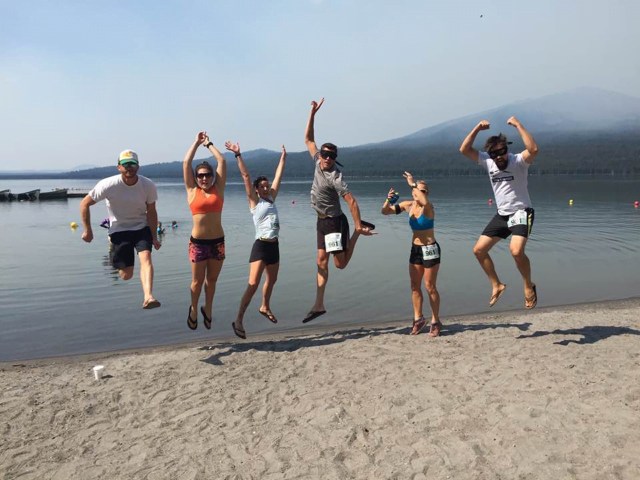 What became a series of lifelong friendships started with pancakes. Amanda was working at JbarJ, spending her Friday mornings running through Bend with other women, taking different loops but always ultimately ending with a stack of pancakes at Riverside Market where Jon worked. Over the course of dozens of weeks and countless pancake orders, Amanda and Jon became friends — bonded over their shared love for running and breakfast foods. Consequently, when August rolled around and Amanda was looking to fill her Cascade Lakes Relay team, Jon immediately came to mind. With the addition of Jon, the team “Run Like You Stole Something” completed the 216-mile course for the first time.

Composed of a mix of friends and family, Run Like You Stole Something traditionally had 12 members with a core group of six: Amanda, Devin, Jon, Juli (Amanda’s best friend), Mary and Tara and Joe (married and neighbors to Amanda’s dad).

Thus, with the other six members fluctuating year-to-year, the group came to be close friends — seeing each other at their best and worst as they spent two days in two vans with cold Pizza Mondo pizza, no showers, and countless beers — many of which were shotgunned by Tara in record time (about 3.5 seconds).

Regardless of the inarguably good times that occurred annually at CLR, Run Like You Stole Something was planning to retire from the event in 2017. Recently married, Jon was traveling much of 2017 and, although he had dreams of running CLR as an ultra team, he agreed to the hiatus to travel and start a life with his new wife but during that year began to experience troubling stomach pain.

With his stomach pain worryingly increasing, Jon returned to the United States and was shockingly diagnosed with late-stage colon cancer in 2018. As with everything in life, Jon gave his best effort, wearing CLR gear during his last weeks because they were his “fighting shirts.” Despite his valiant efforts, Jon tragically died three days before CLR 2018.

“One of my favorite things about Jon is how absolutely excited he would get to do the race. It was contagious to all of us,” said Juli, “You’d think we’d get tired of running the same race every year, but the energy from not just Jon, but every member, kept each year alive with a new adventure! Such great memories have been made while bonding over tired legs, delirious minds, and euphoria that comes from running.”

“My favorite thing about Jon was that he was “The GOAT,” our rock, the one that wouldn’t stop. Even when I was having that moment — you know the one when you want to curl up & quit, he’d be right there, stoically reminding me why I was every bit capable of kicking the beast’s ass.

“One year, he and a few runners got lost and that made him only run faster to make up time. So fast, that he came stumbling into the exchange point. He paced about, refusing to sit down until volunteers told him it was okay because he didn’t want to pass out and be disqualified to run his next leg.”

Because of these memories, and others, Juli and the rest of Run Like You Stole Something decided to run CLR one last time in honor of Jon. This time, they vowed to complete his dream of running as ultra — setting out to finish the course with the core members plus Matt, a runner who was a part of the team several years in the past.

“We don’t care about how fast we are,” said Amanda, “We just want to finish and make Jon proud”

Besides doubling in individual mileage, Juli will also be running while six months pregnant. Consequently, each member is prepared to run for her if need be and Matt, their designated driver, is also ready to complete a few miles. 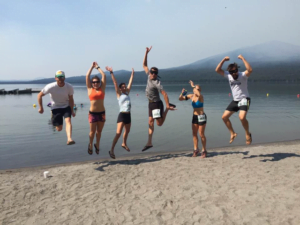 “In the past, Jon was always the one to volunteer if someone needed to switch or needed a shorter leg,” said Amanda.

After pushing through 215 miles, the team will finish the last mile together, ending as a group in Riverbend Park on Saturday. It goes without saying that the finish will be bittersweet — the first time crossing the line without Jon and the last time earning a shirt at the finish.